The later versions of the ISO standard purport to make it easier for service industries to become certified, but service industries often have a  tough time apply­ing the ISO standard to their activities, especially where nonconforming product control is concerned. I have been successful in these applications by simply converting the product emphasis of the standard to the processes of the service company. For example, I have worked with half a dozen or more marine companies where paper is moved around offices to move ships around the world; moved pulp and paper from railcars through warehouses on to ships; repaired ship components on board and on shore; and sup­plied ships with chandlery (all the odds and ends required by a ship at sea).

For the marine freight forwarding company wanting to be registered to 1SO9001 I looked at the docu­mentation as the product: it began with a Freight Engage­ment (the Contract) and ended with a Bill of Lading (permission for delivery). In be­tween was a mountain of documents including Stowage Plans (how does the cargo fit into the ship), Mates Receipts (the final document of release signed by the Chief Officer on the ship) and various other instructions critical for the smooth handling and transmission of the cargo and ship from port to port.

Much of my work as the consultant was to identify and refine all the docu­ments and make sure the process worked smoothly and communication was watertight between all parties. I treated the nonconforming product re­quirement of ISO as nonconforming conditions, applying the nonconforming product/corrective action section of the stand­ard to the errors in the documentation itself and the processes for which it was used. All my work had to be done in the hectic atmosphere of ships arriving and de­parting. Believe me; you have not lived until you have seen longshoremen drive cars from huge ships on to the dock, having been paid for eight hours if they complete the job in four! Even so, each car was neatly stowed side by side, and very little damage occurred.

My customers were not responsible directly for the care of the cargo. The cargo was under the responsibility of the ste­vedores and terminal operators (who were subcontractors to my customer) during its short stay on the terminal, and eventually under the care of the Chief Officer on board ship, who received it from my customer’s representative (Port Cap­tain). I had to be sure that the Port Captain was not doing any inspections which could ultimately mean recording of Inspection and Tests and Nonconformances, but my custom­er’s relationship with the Terminal Operators removed this responsibility. I just had to make sure that the document used for accepting the cargo met the requirements for authorization.

As part of quality system development for one company I had to visit three Operating Superintendents. They were nearing retirement and two of them had just come off a night call. The Operating Superintendents had a very large degree of personal autonomy. They were on call 24 hours a day and often worked under the most appall­ing conditions. As I walked in the air was blue with tobacco smoke. Coffee was there in gal­lons with large boxes of doughnuts.

After I had my share of the coffee and doughnuts I explained that we were putting together procedures for trainees, and how important it was to get it right. I presented them with the draft of the Final Inspection procedure I had written. We needed to have a formal record of their inspections of cargo under the hook, as it went on board ship. The Chief Officer on board would then sign a Mate’s Receipt if he/she were satisfied that the cargo was in good condition. I invited them to review the procedure step by step, sentence by sentence, and tell me if any changes were needed. Within an hour they had forgotten their resistance and were suggesting changes. We even discovered that we had two versions of a Mate’s Receipt, so we were even able to get rid of a form. I don’t know if they were fully converted, but when the QAM went to check on their use of the procedure at a later date it seemed to be working satisfactorily.

Employees such as operating superintendents are extremely powerful in their environments and this, with their experience, has to be considered when you want to make changes. Too often people sim­ply will not follow procedures if they are not expressed in terms to attract their attention espe­cially when they are in a hurry or working under extremely difficult circumstances. Indeed, getting them to follow proce­dures at any time is a major diplomatic exercise until procedures become a habit. Anyone preparing identification or instruction must take account of the reader’s likely comprehension, location, pressure and any other condition, to prevent an instruction being overlooked or simply ignored. 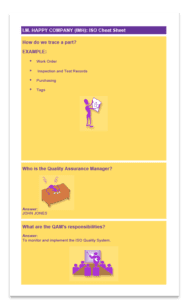